Research has found that efficiently heating and cooling a building has direct positive correlation to healthier, more productive workers and to the overall effectiveness of a commercial operation. But don't just believe the studies.

The Cleveland maker of concrete-strengthening products has seen production rise and energy costs nosedive recently since installing a new HVAC system to control conditions inside its two-story, 15,000-square-foot facility that also houses a laboratory.

“Employees have definitely noticed an improvement in comfort,” said Joe Messer, director of engineering for Euclid. “This allowed us to focus on our core business, instead of worrying about the HVAC.”

The company had relied on an antiquated variable air volume (VAV) system for its heating and cooling needs. The 1980s-era network struggled to keep pace with desired comfort demand and to balance the air load. In addition, the equipment had been Band-Aided so many times, it had become an energy hog, consuming more than twice the average amount of energy for offices in the Cleveland area and more than most of the company’s manufacturing facilities. 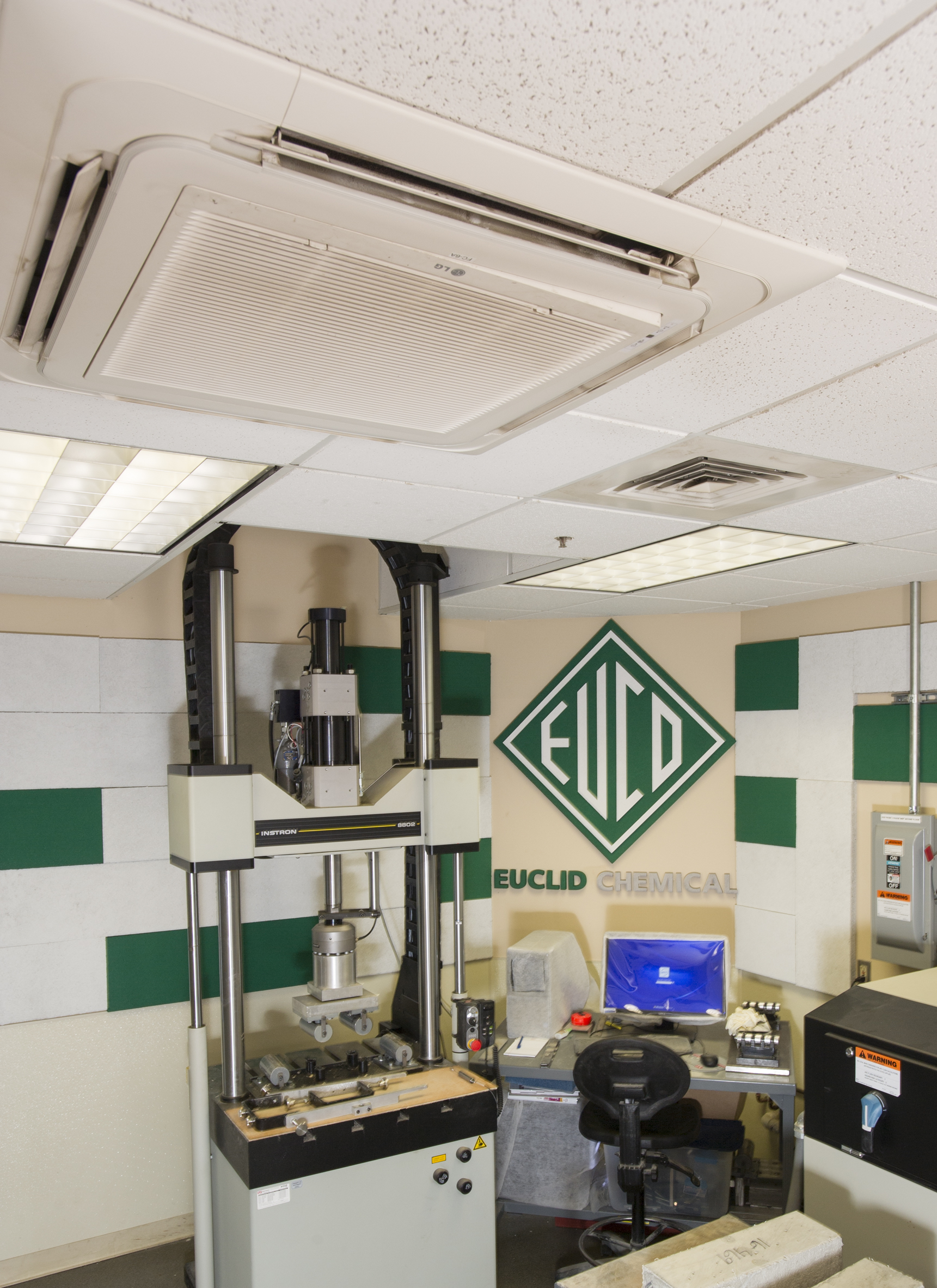 Grappling with those continual problems, Euclid decided it was time for a change.

Because it’s Cleveland facility includes both offices and lab space, Euclid, which develops products ranging from sealants to micro-synthetic fibers, requires an HVAC system that provides individual temperature controls, which, at any given time, may require both heating and cooling in different areas.

With the upgrade, a bulky 50-ton DX unit on the roof was replaced by a pair of small air-cooled outdoor units on the ground, and the VAV boxes inside the building were replaced with LG’s concealed high-static VRF indoor units. To account for the need for ventilation air and makeup air when the laboratory fume hoods were in use, a small makeup air unit with a water heating coil was added to provide ventilation air at a high-static pressure to the LG VRF indoor units.

Since this was 100 percent outdoor air, the airflow could be adjusted to precisely meet the ventilation requirements as they changed. The LG Multi V is a heat recovery system, so it can heat zones that need it while cooling others simultaneously. That capability delivers precise temperature in all parts of the facility, regardless of Ohio’s weather that includes subzero winters.

Since the LG system was installed, Euclid has seen a 70 percent annual energy reduction compared to the average of the previous five years, according to company statistics. 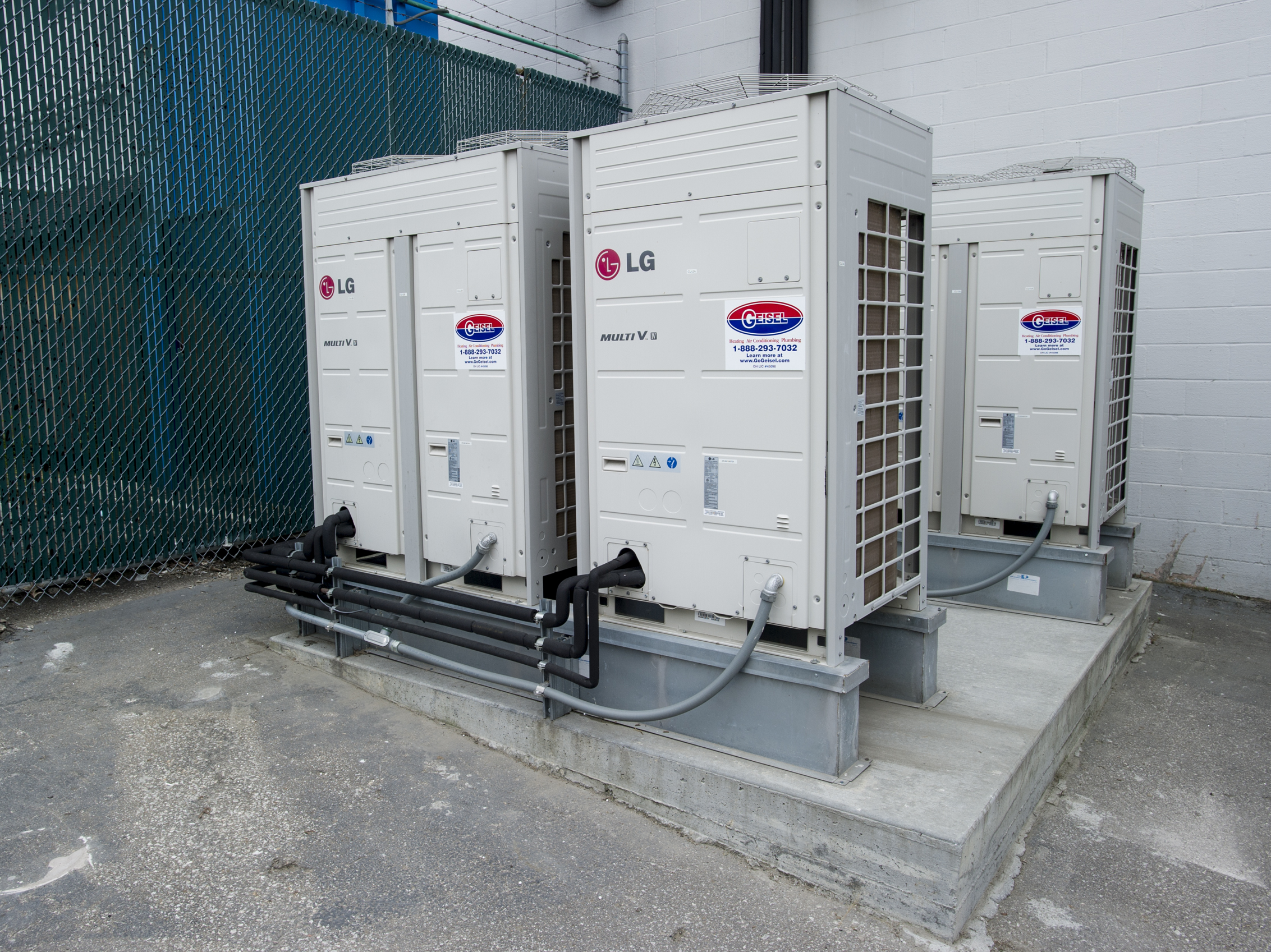 Euclid saved more when it came to equipment needed for the project because Geisel Mechanical Services, which installed the system, was able to reuse the existing distribution and supply ductwork.

LG engineers determined that a VRF was Euclid’s best option for its ailing indoor conditions. VRF, they said, brought two key elements in one system – not only was consistent temperature and humidity achievable, but the idea of purchasing a BTUH and getting more than one value from it (by moving rejected heat in the cooling process to spaces that required heat) was as an efficiency upgrade that wouldn’t be attainable with any other system.

“This product has accomplished all our goals of better temperature control, better comfort and energy reduction,” said Andy Culberson, president of Geisel Mechanical Services. “And do it in a manner that provided a really quick payback for even a large corporation.”