Owned by Houston-based developer Hanover Company and designed by TCA Architects, this project is the first multi-unit apartment building in the City of Los Angeles that allows renters to receive direct savings on their electric bills from rooftop solar installations owned and operated by the developer.

It is also the first project in Los Angeles where people can rent "eco-green" units designed to be highly sustainable, energy efficient, and net zero energy by producing enough solar power to meet each tenant's annual electricity needs.

Until 2016, the Los Angeles Department of Water and Power (LADWP) did not allow solar power for apartment renters who paid their own electric bills. In LADWP territory, utility customers were required to own the building if they intended to install solar on the roof. Because 54 percent of Los Angeles homes, condos, and apartments are renter occupied, this meant tens of thousands of renters in LA were effectively prohibited from going solar.

"This was an exceptionally complicated project, and Hanover deserves a lot of credit for pushing to get 20 of these units to the net zero energy level. This took extensive collaboration between representatives from the LADWP solar program, the LA Department of Building and Safety, energy consultant Green Dinosaur, and Promise Energy to design and permit the most effective solar solution for the development," said Adam Boucher, CEO of Promise Energy.

"Downtown Los Angeles is the perfect location for Hanover to introduce our Eco-Apartment concept," Ryan Hamilton, Acquisitions and Development Partner for 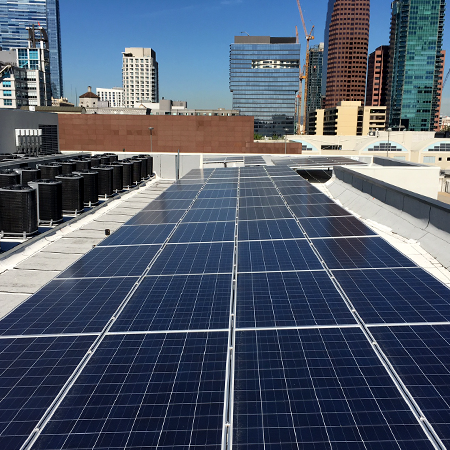 Hanover Olympic told Inhabitat. "The area is attracting innovators and first-adopters seeking a luxury lifestyle with new tech and top amenities. We have been able to do all of that and provide the city with its first and only solar-powered, net-zero apartment homes and hope that the success of this program will bring more attention to living a sustainable lifestyle."

"The solar systems for Hanover Olympic were challenging to design and install because LADWP's solar policy does not allow virtual net energy metering. This meant that instead of installing one solar system and distributing the credits to each unit, we had to get creative and work together with LADWP and the owner to design twenty separate 3 kW rooftop photovoltaic systems, one for each unit. Together, the solar systems total 65.5 kilowatts and will produce an approximate 90,000 kWh of electricity per year," said Jonas Villalba, VP of Project Development at Promise Energy.

According to Environment California, Los Angeles is second only to San Diego as the top solar city in the country in terms of total megawatts installed. But Los Angeles is only #15 when it comes to solar installed per person.

"As a result of this project, Promise Energy was able to help move solar policy forward in the city of Los Angeles," said Andy Mannle, VP Strategic Development at Promise Energy. "This is the first project in LADWP jurisdiction to provide solar directly to tenants with the intention of achieving true zero net energy. It's a step in the right direction if we are serious about meeting California's Zero Net Energy Building Goals, which call for all new construction residential projects to be zero net energy by 2020, and all new commercial construction projects by 2030."

The Olympic project has been receiving a lot of positive attention in the green and architectural community. Dominique Hargreaves, executive director of USGBC-LA chapter mentioned it as a notable project for LA Downtown News, and the project was featured as one of "six buildings of the sustainable future" in Architectural Digest.

Promise Energy's efforts on this project have improved solar policy in Los Angeles and opened the door to increased solar access for renters in one of the sunniest cities in the nation.

"When it comes to solar for multifamily buildings, we're really just getting started," said Boucher. "A recent UCLA report found that Los Angeles County has tapped barely 2% of its solar capacity. If we can get that up to 10%, we could create nearly 50,000 jobs, and reduce emissions equivalent to taking a half a million cars off the road each year. So the sky is the limit, and Promise Energy is excited to be doing our part to push this important industry forward."