(Below) Sunflare worked with The Hunger Project to install Sunflare panels at one of its community centers in the middle of Ghana, Africa. Photos courtesy of Sunflare

On the surface, some buildings don’t appear to be ample spots for solar installation. There isn’t enough room to set an array of panels, or there isn’t enough structural durability to support the weight.

A relatively new product is helping building owners and operators overcome those challenges.

Sunflare, a thin, flexible solar cell, can be affixed to walls and even wrapped around exterior corners, harnessing the suns rays and producing energy for some of those otherwise unlikely users.

The advent of Sunflare comes as solar usage is rocketing. Half a million solar panels were installed every day in 2015. According to a report from the International Energy Agency (IEA), renewable energy, mostly solar and wind, accounted for more than half of all new electric capacity added in the world last year, a 15 percent jump from 2014.

The majority of those solar panels uses traditional technology that has to be installed in large, bulky racks, and are sensitive to high temperatures and low light, losing their ability to absorb energy as efficiently during other times of the day.

Elizabeth Sanderson, chief marketing officer for Sunflare, recently spoke with Proud Green Building about Sunflare, its capabilities for commercial users and the impact the product can have on the renewable energy industry.

PGB: What was the a-ha moment that spurred the idea for Sunflare?

ES: Our founder worked in a firm manufacturing air conditioning when he was younger and saw what technology could do for people. He said, ‘When I grow up, that's what I want to do. I want to be in technology that can do something for the mass.” That's his vision for Sunflare, to make solar affordable for the masses.

With new technology, as you gain momentum, you obviously go lower in price. Ultimately, our vision is to reduce CO2 and make a healthier planet. To do that, we have to have solar almost everywhere. In order to do that, it's got to be affordable and can’t cater to feed the few. 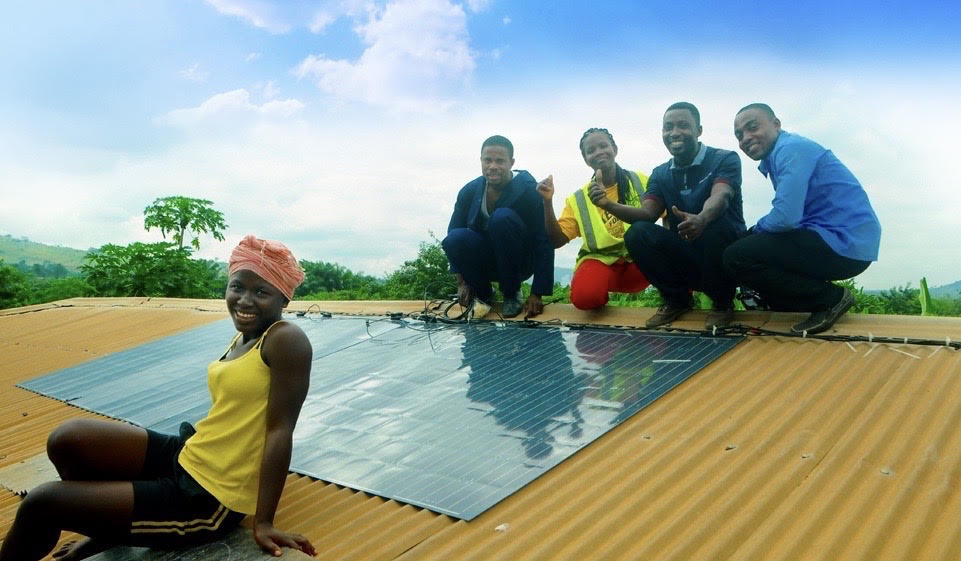 PGB: Is this a product that has the ability to be placed everywhere?

ES: It’s light and flexible, and where there’s full sun, it can operate. Right now, when you fly into L.A. and you see all those white roofs, they can't handle the weight of silicon panels, but they can handle the weight of our products. So it's in the places where silicon can't go.

On a vertical wall, it sits in full sun. There's no reason you can’t have solar on it. Right now, we're building it into curved trailers because it can follow the line of an interesting design.

PGB: What opportunities do you see for the green and sustainable building fields with Sunflare?

PGB: Is this an opportunity for building owners and operators who want to use solar but haven’t previously had a way to do so?

ES: Absolutely, because of the benefits of being so light and so thin and not needing the heavy hardware of the racks. One of the things about CIGS, which is the material that we're made of, is that it can get more productivity at low light. At dawn and dusk, we get more light than silicon. At high noon, ironically, silicon doesn't operate well in high heat. CIGS can handle that better. We get 10 percent more efficiencies because of the nature of CIGS. Again, it's light, thin and flexible, and it can it can produce in places where silicon can’t.

PGB: How does Sunflare work compared to traditional solar panels?

ES: All panels basically work the same. They all get direct current from the sun. And if you're going to plug it in, you need to convert it to AC. They all have the same connectors.

At dawn and dusk and midday, we produce 10 percent more energy, if side by side, than a silicon panel. From plain efficiency, we're at 15 percent, which is about equivalent to silicone. Solar today ranges from 10 percent to 22 percent. Efficiency is the measure of how a tile converts sunlight to electricity.

We're all working to get the most efficient panels, and we're just at the beginning of that stage.

PGB: Can you talk about the makeup of panels?

ES: From a weight standpoint, we are a quarter of the weight of silicon. A standard panel is 16 ½ pounds, and we're 4.1 pounds. From a thickness standpoint, our panel is 2 mm, and theirs are 40 mm. The weight, of course, can vary by the number of cells.

PGB: Do Sunflare cells come in different sizes or a standard size?

PGB: Where is Sunflare being used?

ES: Right now, it's on our factory in China. It's in the middle of Africa, where they didn't have electricity for a community center for a nonprofit that I work with. It's in a stadium in Sweden. We’re working with some customers that have it on a hybrid bike-motorcycle and wrapped on a trailer. We're getting data from all of those. In Africa, they didn't have any electricity at all. Now it's powering lights, a computer, a refrigerator for the medicines – all that they didn't have before.

PGB: Do you see Sunflare as a solution for both new and existing construction?

ES: There's no reason it couldn't be. It really depends on the builder and what sort of product they want to use. If all the existing roofs in the U.S. were all covered in solar, we could take care of 40 percent of all of our energy needs. That’s just with existing buildings.

PGB: What about the cost?

ES: If you look at instillation, because we're so much easier to install, we're about equivalent installed compared to silicon. We're higher on just a panel-to-panel basis. And that's because we're at the beginning of production. Ultimately, we see that we could be maybe a quarter of the cost down the road, with higher volume.

PGB: Sunflare is held in place with tape. Can you describe the installation process?

ES: It's a special tape. You can literally put it down and place panels next to each other. There’s no drilling in the roof or installing of racks.

PGB: How resilient is the tape to the outdoors?

ES: Is it waterproof. It stands up to wind. So far, we haven’t had anything fly off. In terms of where our product is in use, we’re in the cold of the cold and the hot of the hot.

PGB: Sunflare seems versatile. Can these tiles be moved?

ES: You can move them, but because the tape is so strong, you have to go to methods to take it up. Why would you ever want to move it? You can make the world a better place by passing it on and leaving it to the next guy.

PGB: Is this sort of thinner, flexible design the future of solar?

ES: I hope it's in the future, until we break through to another new platform. To bring forth the vision of reduced CO2, we need to keep innovating. This is a good step in the right direction. We see any advance in solar as good for everyone. Hopefully, everyone keeps their minds open and their gears turning.