With the 2018 Winter Olympics having coming to a close, they likely are to go down among the most sustainable.

Games organizers focused on strengthening the local economy, celebrating diversity, pushing innovation forward and advancing education through sport, both during the event and beyond, according to the official Olympics site.

The PyeongChang 2018 Organizing Committee (POCOG) launched the Olympic Education Program as part of a new partnership with the Republic of Korea's Ministry of Education. The educational initiative has enabled school children throughout the country to gain exposure to winter sports while also experiencing the triumph of the human spirit through the exploration of the Olympic values. The goal is to build a new stage for winter sports for the younger generation in Asia, increasing knowledge, enthusiasm and participation in a wider range of sports. In total, the Olympic Education Program directly reached 1.3 million people, and 5.5 million indirectly.

Meanwhile, a similar initiative called the Gangwon Province Dream Program enabled 1,919 school-aged children from 83 countries, where it doesn't typically snow, to engage in winter sports activities, and to learn about Korean culture. Workforce development education is also a priority at the games, with a training pool of more than 22,000 experienced volunteers now prepared to serve at future local events. Training sessions were provided to employees at area hotels and restaurants, encouraging the continued development of professional skills.

Demonstrating the Olympic Movement's commitment to hosting an Olympic Games that benefits the long-term development of the host city region, the PyeongChang 2018 Organizing Committee carried out several measures to enhance the environmental, economic and societal impact of the XXIII Olympic Winter Games.

Each action, as shared in a sustainability report ahead of the Games — which reinforces the mission of the International Olympic Committee (IOC) to establish sport as an agent for positive change — is designed to benefit both humanity and the environment across several areas. They include reducing greenhouse gas emissions; embracing renewable energy; building sustainable venues; using an environmentally-friendly transport infrastructure; and conserving biodiversity and restoring nature.

"The facilities, including the newly built stadiums, took sustainability into consideration from their construction, to their operations and post-Games usage…," said Balazs Horvath, director of the United Nations Development Program (UNDP) Seoul Policy Centre. "We can hold hope for the sustainable development of PyeongChang if the newly created jobs are maintained, waste minimised and damaged forests in parts of Jeongseon area are restored."

Here is a closer look at some of the other legacies the Olympic Winter Games PyeongChang 2018 are bringing about:

In addition to spearheading initiatives to ensure biodiversity and ecological balance in the areas the Games are held, POCOG, as part of the wider Olympic Movement, has taken steps to reduce the environmental impact of the Games. Adding to its reduced carbon footprint drive, six newly built Olympic competition venues received green building certification. POCOG also designed a recycling infrastructure that is used across Games locations.

Doing their part to reduce the Games' carbon footprint, operational staff members are driving several electric and hydrogen-powered vehicles for the duration of the Games. With an eye on encouraging electric car adoption, permanent electric vehicle recharging stations were installed for community use, even after the close of the Olympic Winter Games PyeongChang 2018.

Eight of the venues will be used as winter sports facilities following the Games, helping to position the region as an Asian winter sports hub for decades to come.

However, despite legacies being identified in the candidature, and different options being presented over the past seven years, the definitive legacy use is still outstanding for three venues. A taskforce has been created to address the use of these facilities. The IOC has requested that the final plans be presented as a priority, and will continue to work with PyeongChang to ensure legacy plans are fulfilled.

Apartments at both the PyeongChang and Gangneung Olympic Villages, as well as the media village, are already providing tangible legacies, with all the apartments already sold for residential use after the Olympic and Paralympic Winter Games.

In addition, a new high-speed train that serves as an additional transport option for those who came from Seoul for the Games in under two hours will also connect Seoul to the Alpensia mountain region and Gangneung coastal areas for decades to come. 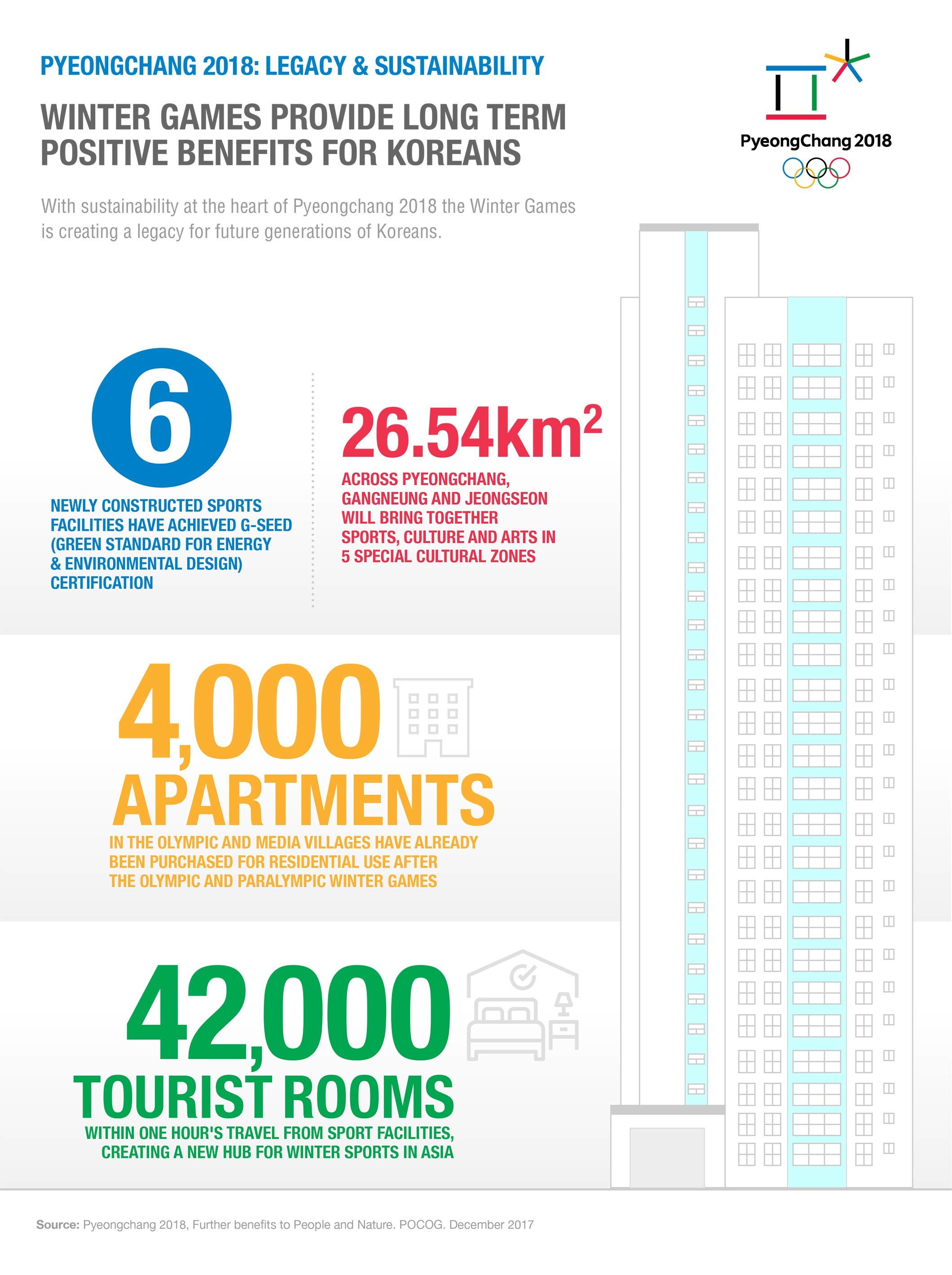