Alcatraz one of largest microgrids in U.S.

Welcome to The Rock.

Each year, more than 1.5 million people tour Alcatraz Island to visit its iconic prison. But, most people don’t realize that the 22-acre site, in the middle of the San Francisco Bay, is also home to one of the nation’s largest microgrids, according to the U.S. Department of Energy.

The island is equipped with a solar-diesel hybrid power system that most visitors probably won’t notice. Its 305-kilowatt (kW) solar array sits on top of the main prison building and is hidden from public view to preserve its historical integrity. The solar panels connect to a battery bank and power inverters that help power the island instead of relying solely on diesel generators.

This $7.1 million project, originally funded through the American Recovery and Reinvestment Act, has reduced the island’s fuel consumption by 45 percent since its 2012 installation. It also saves more than 25,000 gallons of diesel fuel a year in the process, proving historical preservation and renewable integration is possible.

Powering Alcatraz has always been a challenge, and it’s a big reason why the prison closed in 1963 after 29 years of operation. The island is completely cut off from the mainland with no access to outside power lines.

As a result, the National Park Service ferried up to 2,000 gallons of diesel fuel a week to Alcatraz to power its electric generators. This led to high operational costs and introduced a pollution risk to the bay. In fact, a 2008 greenhouse gas inventory performed by the Golden Gate National Recreation Area found that generators on Alcatraz Island produced more than 632 metric tons of carbon dioxide ­– nearly half of the total electricity generation emissions for the entire park.

The main components of the Alctraz microgrid include:

The inverters convert direct current power from the solar array into alternating current power that’s compatible with the island’s utility system. Other inverters reverse that conversion for battery charging.

When there isn’t enough power coming from the sun, the batteries discharge through their inverters. If the batteries are low, diesel generators automatically turn on to power Alcatraz and recharge the battery bank until there is enough charge to sustain the island load by itself.

The system’s controller device manages where the main source of energy is coming from and should prioritize the solar panels and batteries before activating the generators. Since 2012, the island’s fuel consumption has been cut nearly in half compared to what would have been consumed without the PV and battery system installation.

After the first two years of operation, a recent report by our Federal Energy Management Program and the National Renewable Energy Laboratory showed that 45 percent of the island’s energy came from solar. This is 15 percent lower than what the system components were sized for.

The data indicates that the generators charging the batteries are crowding out storage capacity, resulting in significant curtailment (or discarding) of excess solar power.

The National Park Service is working to improve operations by adjusting set-points of the current controller device. It is also seeking additional funding for a new microgrid controller capable of providing more sophisticated optimization and advanced features, such as forecasting and demand management. Adjustments to the operational strategy could reduce PV curtailment to about 5 percent, save an extra 15,000 gallons of diesel fuel annually and increase battery life expectancy by 33 percent. 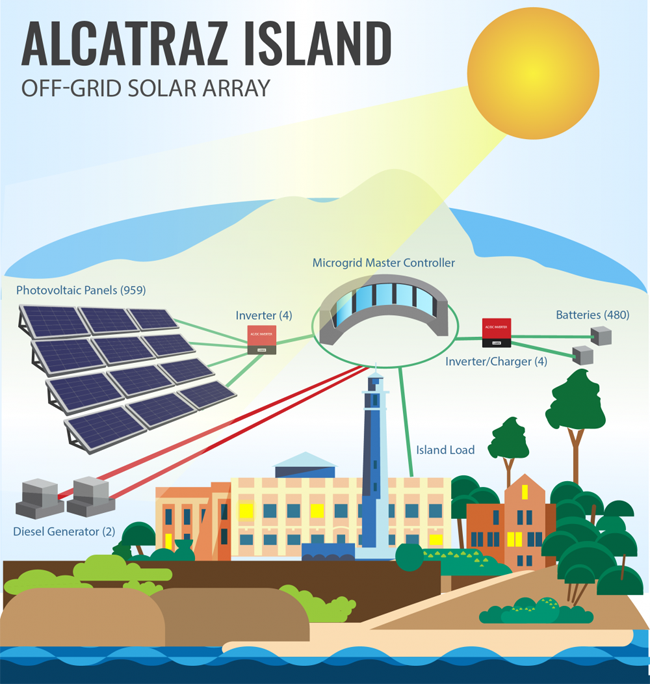