Fifth Third Bancorp has become the first Fortune 500 company and first bank to sign a power purchase agreement to achieve 100 percent renewable power through a single project, according to a release.

Fifth Third also has become the first publicly-traded company to commit to purchase 100 percent renewable energy through solar power alone. The power purchase agreement will lead to the construction of an 80-Megawatt (MW) solar project in North Carolina.

The Hertford County Aulander Holloman solar facility is a roughly $200 million project that will be designed, built and owned by Mooresville, N.C.-based SunEnergy1. It will employ approximately 1,000 people during construction, generate roughly 194,000 MWh/year of electricity and help avoid 144,000 metric tons of greenhouse gas emissions per year. This is equivalent to the annual emissions from more than 21,600 homes or 30,800 passenger vehicles.

“This initiative affirms our bold commitment to advance environmental stewardship on behalf of customers, employees and shareholders,” said Greg Carmichael, chairman, president and CEO of Fifth Third Bancorp. “This innovative project will reduce Fifth Third’s carbon footprint and benefit the communities we serve.”

To emphasize Fifth Third’s commitment to renewable energy, the bank joined both RE100, a corporate leadership initiative led by The Climate Group in partnership with the Carbon Disclosure Project, and the Business Renewables Center.

Fifth Third was assisted in the selection and execution of the power purchase agreement by Schneider Electric’s Energy & Sustainability Services. 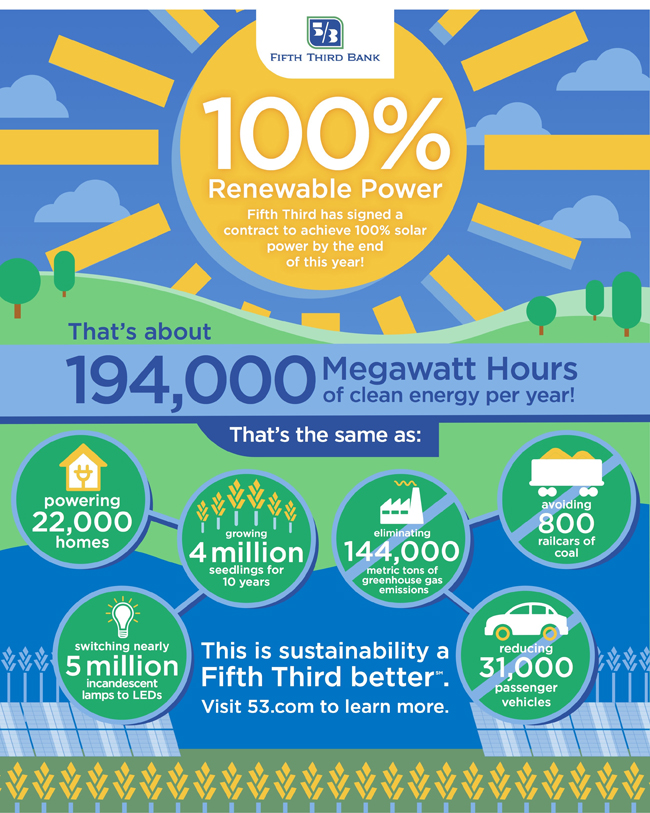