Hydrogen is the simplest and most abundant element on earth. It consists of only one proton and one electron. Hydrogen can store and deliver usable energy, but it doesn't typically exist by itself in nature and must be produced from compounds that contain it, according to the U.S. Department of Energy.

Hydrogen can be produced from diverse, domestic resources. Currently, most hydrogen is produced from fossil fuels, specifically natural gas. Electricity — from the grid or from renewable sources such as biomass, geothermal, solar, or wind — is also currently used to produce hydrogen. In the longer term, solar energy and biomass can be used more directly to generate hydrogen as new technologies make alternative production methods cost competitive.

Most hydrogen can also be produced through steam methane reforming, a high-temperature process in which steam reacts with a hydrocarbon fuel to produce hydrogen.

There are many ways to produce hydrogen using sunlight, including photobiological, photoelectrochemical, photovoltaic-driven electrolysis and solar thermochemical processes.

Hydrogen is an energy carrier, not an energy source and can deliver or store a tremendous amount of energy. Hydrogen can be used in fuel cells to generate electricity, or power and heat. Today, hydrogen is most commonly used in petroleum refining and fertilizer production, while transportation and utilities are emerging markets.

Hydrogen is a clean fuel that, when consumed in a fuel cell, produces only water, electricity and heat. Hydrogen and fuel cells can play an important role in our national energy strategy, with the potential for use in a broad range of applications, across virtually all sectors — transportation, commercial, industrial, residential and portable. Hydrogen and fuel cells can provide energy for use in diverse applications, including distributed or combined-heat-and-power; backup power; systems for storing and enabling renewable energy; portable power; auxiliary power for trucks, aircraft, rail, and ships; specialty vehicles such as forklifts; and passenger and freight vehicles including cars, trucks, and buses.

Due to their high efficiency and zero-or near zero-emissions operation, hydrogen and fuel cells have the potential to reduce greenhouse gas emission in many applications.

Energy Department-funded analysis has shown that hydrogen and fuel cells have the potential to achieve an array of reductions in emissions.

The greatest challenge for hydrogen production, particularly from renewable resources, is providing hydrogen at lower cost, according to the DOE. For transportation fuel cells, hydrogen must be cost-competitive with conventional fuels and technologies on a per-mile basis. This means that the cost of hydrogen — regardless of the production technology — must be less than $4 a gallon gasoline equivalent. To reduce overall hydrogen cost, research is focused on improving the efficiency and lifetime of hydrogen production technologies as well as reducing the cost of capital equipment, operations, and maintenance.

The graphic below, from the DOE, looks at hydrogen as a renewable energy source. 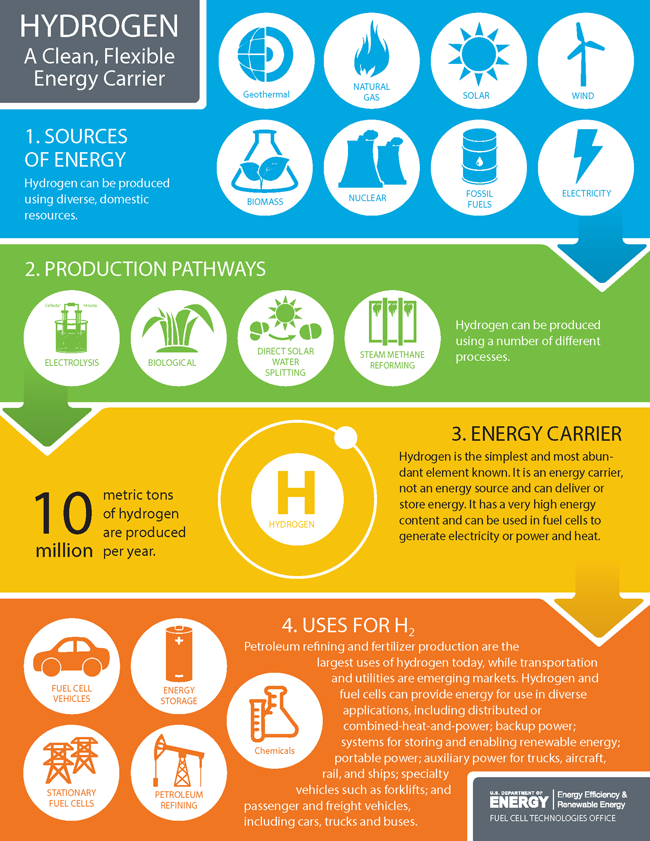