Deep in the heart of California’s Central Valley, industrial food processing facilities use thermal energy to preserve, prepare and package a diversity of food products.

The massive operation requires 11 million megawatt hours of energy annually, presenting ample opportunity to use other energy sources, like concentrating solar thermal power, to generate the heat and steam needed.

Since the 1880s, inventors have taken advantage of the rapid and efficient heating capabilities of solar as a thermal energy resource. More than a century later, Sunvapor’s technology is at the forefront of transforming industrial heat processing, according to the U.S. Department of Energy.

In a new partnership with Horizon Nut, Sunvapor will demonstrate its sustainable solar collector and method for generating steam that will pasteurize, blanch and roast nuts — namely pistachios.

Applying funds from the U.S. Department of Energy’s SunShot Initiative, Sunvapor designed a solar collector to cut costs and optimize the supply chain by using less energy to manufacture the structural components. Called the Green Parabolic Trough Collector, th technology replaces expensive steel assemblies with wood, improving both the optical and structural functions of the collector without compromising heat generation. Coupled with a new manufacturing method, the new design and materials can cut the cost of the trough by as much as 50 percent.

In Sunvapor’s approach, a field of mirrored parabolic troughs direct sunlight to a receiver that’s then used to heat an intermediate working fluid. The fluid boils water that’s used to heat, dry and clean foods.

While this method can also be used to generate electricity, converting energy from sunlight directly to steam reduces energy losses, making this application both highly efficient and cost effective.

With its SunShot award, Sunvapor validated the feasibility of cost, performance, and durability of the new collector design. While the system is capable of efficiently operating at 500 degrees Celsius, food processing applications only need to achieve temperatures up to 230 degrees Celsius. Through simulation, cost estimation and component testing, Sunvapor was able to determine that the collector’s performance is so durable it could last for 30 years.

In April 2017, Sunvapor entered into an agreement with Horizon Nut, a pistachio processor, to validate performance. The site is in California’s agricultural heartland in the Central Valley alongside many of the nation’s food processors, many of which have similar steam needs. 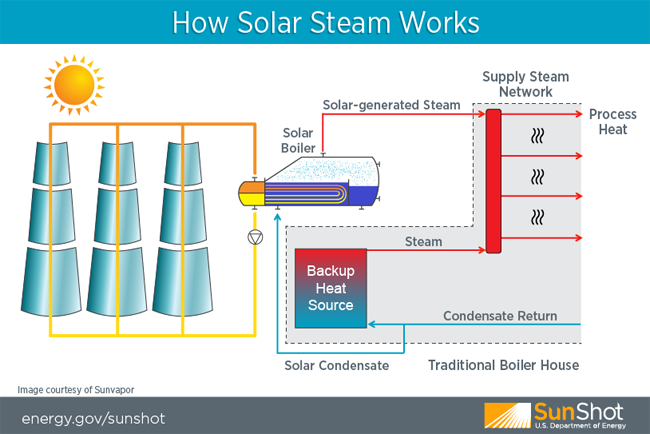